A city which always made its mark by being different,
being a dominant Muslim empire in the midst of Hindu & Buddhist dominated Ancient India or being the IT Hub of south India, accommodating various cultures and being one of the richest cities in India. There is more to it. Here’s a list of few things about Hyderabad you should know.

1. The State of Hyderabad

Yes, Till 1956 the city of Hyderabad was part of the Hyderabad State, which consisted of portions of Telangana, Maharashtra and Karnataka. The state was under the rule of Nizams of Hyderabad till 1948, when Sardar Patel used operation Polo to unite India using Indian Army. After their era it remained as a state in the Union of India. The state was dissolved in 1956 after the formation of Andhra Pradesh State.

The Hyderabadi Hindi is significantly  different from North Indian Hindi as its an amalgamation of Urdu and Telugu vocabulary. People who are not aware of it might have a hard time communicating in Hindi with the locals.

3.  6th most populated city in India.

Hosting a domestic population of about 6.8 million it is named as the 6th most populated city in India. A Survey by Telangana State Government, ‘Samagra kutumba survey’ on August 19, 2014, reveals that Hyderabad’s overall population has crossed 12 million

Hyderabad is one of the elite cities in India, which has a top business school like Indian School of Business and top technology institutes like  IIT,  IIIT, and BITS.

Hyderabad has one of the two official retreats for the President of India and each year the President spends time here doing his official work at Rastrapathi Nilayam during winter when Delhi becomes real cold.

The screen is 72-foot high, 95-foot wide is accompanied by 635 seats and a 12,000-watt sound system.The Prasads IMAX theater made its name by being the most attended screen in the world for major blockbusters such as The Harry Potter and Spider-Man films.

7. India’s largest and the most technologically advanced convention facility

Hitex- Hyderabad International Convention Center, Constructed by Emaar MGF of India owned by United Arab Emirates.  with 5,000 seating capacity and 291,000 square foot area, it is India’s largest and the most technologically advanced convention facility. It is an integrated  facility with a 287-room-capacity business hotel, Novotel Hyderabad, covering 15 acres.

8. Buddha statue at hussain sagar lake  is the largest monolithic statue of gautam Buddha in the world.

The statue is  18-metre high and located in a small island in the middle of the lake.The statue was chiseled out of a white granite rock, weighting 450 tons, by 200 sculptors in two years. It was a dream project of then Chief Minister of Andhra Pradesh N T Rama Rao turned reality by 1992. 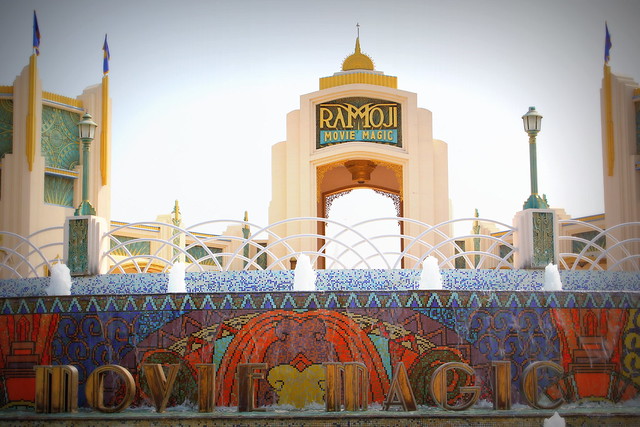 Started in 1996 , this film city is built over a huge area of 1666 acres.Not many know that this place was built on Nizam war grounds and is believed to be haunted.

10. Chitragupta Temple: According to Hindu mythology, Chitragupta is the prime associate of the god of death Yama and is assigned with the task of keeping records of an individual’s good and bad deeds to determine their afterlife.  There aren’t many temples on his name as he is not considered as god.  This rare temple Chitragupta Mahadeva Devalayam, is found in Chatrinaka, inside the Old City complex of Hyderabad.

Hyderabad is home to some of the most beautiful artificial lakes in the world with lakes such as Hussain Sagar, Osman Sagar and Himayat Sagar being created by dams on River Musi.

The Koh-i-Noor (the “Mountain of Light”) , which was once the largest known diamond in the world was originally mined in Kollur mines of andhra and then had its way to golconda fort. Golconda is famous for producing some of the world’s most valued diamonds like the  Hoe diamond and the Darya-i-noor.

We cant end this article without mentioning the world famous Hyderabad biryani , can we?