Since time immemorial, the North and South of India have seen themselves as polar opposites. If South India meant idli-dosa to the Northies, North India meant butter chicken and naan to the Southies.

The North thought of all of South India as ‘Madrasis’ (MOST still do – LOL), stereotyping their attire, accent and personality, while the South thought of the North as a place full of fair complexioned snobs, intent on loud display of material wealth and lacking etiquettes.

However, there is change in the offing now. Over the years, people have transcended boundaries to flock to either sides of the country. You’re as likely to find South Indians in Delhi as you are to find North Indians in Chennai. Our horizons have widened and minds broadened.

Yet, there are umpteen things that South Indians and North Indians miss about their respective abodes.

So, with this, I present to you 10 problems that South Indians face in North India –

1. That one chutney and that one pickle with ‘extra spice’.

..as opposed to the ‘sweet tinge’ in their North Indian counterparts.

2. The freedom of speech in your native language.

“Ille, app..”, You get a hundred glares before you even start ranting. And then comes the famous dialogue, “South mein math bolo yaar”. (Okay, so in the North, there is just one language – SOUTH; or sometimes, MADRASI. Telugu, Kannada and Malayalam cease to exist!) 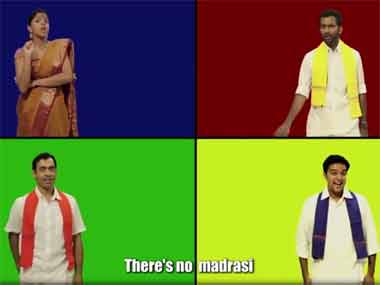 The harsh North Indian winters come as a shock to you when you are adapted to mere 15-20 degree winters back home.

4. And you crave to hear the gushing sound of a wave.

And each time that you do, you fail to comprehend how the North Indians live without the beach.

5. The feeling that you get when you watch a South Indian movie in the theatre on the very first day…is no longer existent!

And you crib about it each time you watch a horrible print of it on your laptop. Add to it, the whistles and the cheers of the crowd.

6. You miss the scrumptious food served at South Indian weddings.

And all the endless list of delicious curries, with ‘RICE’.

7. Whoever enlightened us about the three basic amenities – Roti, Kapda, Makaan.

Every single time that you see the glimmering ghagras or the clinking ghoongrus; you think of the half sari, the white Kerala saree with the golden border and the Tamilian lungis.

Idli, Vada, Dosa, Upma, Appam, Uthappam, Kudum, Puttu..and I can go on and on, and still never end.

9. Trying to explain where you belong.

“Yes yes, I come from Thiruvananthapuram.”

“Not nanantha, just nantha”; and you fail at every effort to make your North Indian friends say it right; because their geography (only about South India) is so poor.

10. The traditional non-vegetarian curries which cannot be replicated elsewhere.

From Chettinad Chicken to Chepala Pulusu to the Nadan beef curry, every single one of them !

But all said and done, we find our niche in North India and begin to fall in love with the Butter Rotis and the Veg Kofta and the Butter Chicken and the Paneer Masala..and the list is endless here too! 😉